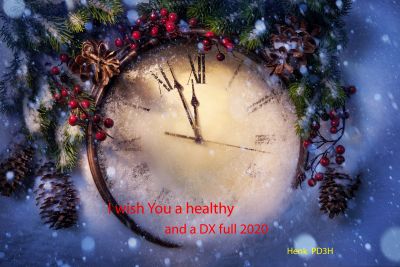 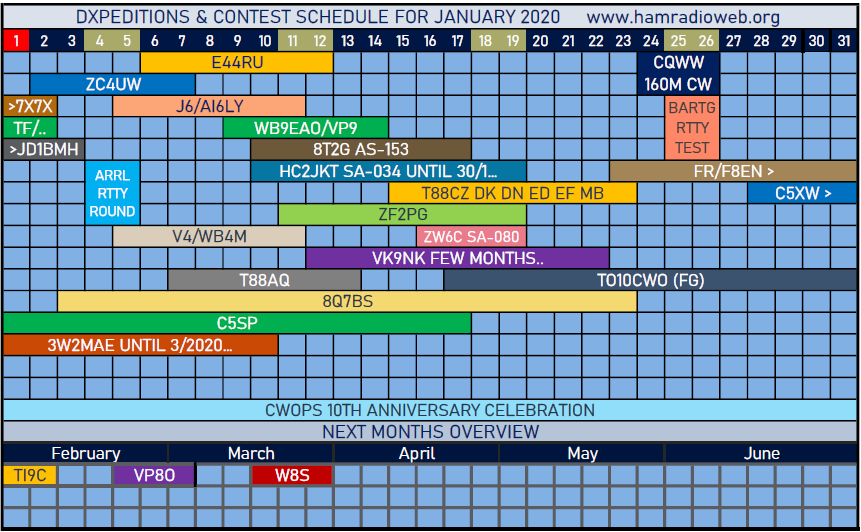 C5 - Przemek, SP3PS will be active again as C5SP from The Gambia from 27 December to 17 January. He will operate SSB and FT8/FT4. QSL via home call and LoTW.

CE0Y - Owing to "unexpected problems" encountered upon his arrival in Chile, Oleh KD7WPJ (UR5BCP) has had to delay his operation from Easter Island for a couple of days. He now expects to be active as CE0Y/UR5BCP on 28-31 December on 40-6 metres SSB, CW, FT8 & FT4. QSL via KD7WPJ (direct or bureau); his digital QSOs will be uploaded to LoTW.

DL - Celebrating the 70th anniversary of the Deutscher Amateur Radio Club (the German IARU society), special callsigns DF70DARC and DP70DARC will be active from 1 January to 31 December. QSL via the bureau, LoTW, eQSL, or direct to DK5DC; logsearch on Club Log.
See http://www.70darc.club/ for information on the DARC 70 Award.

EX - When time permits, Andrea, HB9DUR will be active again as EX0DX from Kyrgyzstan from 27 December to 11 January. QSL via Club Log's, OQRS, LoTW, or via home call.

FG - Taking part in the celebrationf for the 10th anniversary of CWops (see "Good to Know" below), Jean, FG8NY will be active as TO10CWO from Guadeloupe (NA-102) on 17-31 January. QSL via FG8NY, direct or bureau.

FR - Roland, F8EN (TR8CR) will be active as FR/F8EN from Reunion Island (AF-016) from 23 January to 18 February. He will operate CW only on the HF bands. QSL via F6AJA (direct or bureau); logsearch on http://lesnouvellesdx.fr/voirlogs.php.

G - Celebrating the New Year 2019, special event stations GB0HNY, GB1HNY, GB2HNY, GB4HNY, GB5HNY, GB6HNY, GB8HNY and GB9HNY will be active from 28 December until 24 January. They are being run by members of Denby Dale ARS. Paper QSL cards will not be issued.

HB9 - HB40HTC and HB40HC are the callsigns for the Helvetia Telegraphy Club to celebrate its 40th anniversary in 2020. QSL via the bureau and LoTW. A special activity programme - the HB Open CW Activity (HB-OCWA) Award - will be in place throughout the year to mark the anniversary, help activate the special callsigns and also "inspire amateur radio operators in Switzerland and elsewhere to increase CW activity on the HF bands. The intent of the award is to encourage and reward them for conducting sustained CW conversations rather than short-duration CW signal reports". See https://hb-ocwa.ch/ for detailed information.

HK - Once again the Liga de Radioaficionados de Manizales (HK6RM) will be active as 5K6RM on 3-14 January for the annual Manizales Fair. Look for activity on all bands SSB, CW and digital modes. QSL via the bureau, direct, LoTW or eQSL.

I - ARI Fidenza will use a series of special callsigns throughout 2020 to commemorate twelve major events and achievements in Guglielmo Marconi's life:

QSLs via IQ4FE, bureau or direct. See http://arifidenza.hamlogs.net for the "Marconi: Genius and Brainwave" award.

PA - Special callsign PA75VERON will be activated throughout 2020 to celebrate the 75th anniversary of the Vereniging voor Experimenteel Radio Onderzoek in Nederland, the Dutch IARU society. Activity will be on 40-10 metres FT8. QSL via eQSL and LoTW only.

SP - Special callsigns 3Z90PZK, HF90PZK, SN90PZK and SP90PZK will be Active from 1 January to 31 December 2020 to celebrate the 90th anniversary of the Polish Amateur Radio Union (PZK, Poland's IARU Society). Active during the same period will be also HF90TPAR, HF90TPBB, HF90TPBF, HF90TPBG, HF90TPCF and HF90TPCG, whose suffixes memorialize the callsigns of the founding members of the Lwowski Klub Krotkofalowcow, the first amateur radio club in Poland and forefather of PZK. QSL via operator’s instructions

UA - The Russian Robinson Club will operate special event station R200ANT between 1 January and 31 March 2020 to commemorate the 200th anniversary of the discovery of Antarctica. QSL via RZ3EC.
The first confirmed sighting of mainland Antarctica (27 January 1820) is attributed to the Russian expedition led by Fabian Gottlieb von Bellingshausen and Mikhail Lazarev, who discovered an ice shelf at Princess Martha Coast that later became known as the Fimbul Ice Shelf.

W - Special event station W2HRU will be active on 80, 40 and 20 metres SSB between 29 December and 4 January. QSL via N2MUN (direct or bureau), LoTW and eQSL. The suffix stands for Ham Radio University, "a day of education to share ideas, experiences, knowledge and fellowship among Amateur Radio operators". The 21st annual event will be held on 4 January in Brookville, NY. Complete information can be found at http://hamradiouniversity.org/.