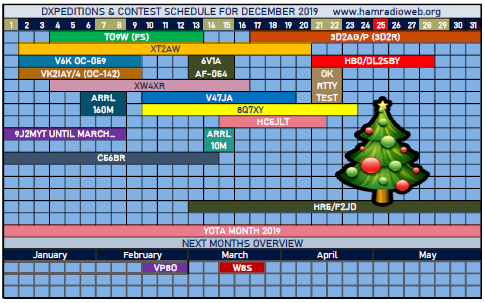 3D2/R - Sailing to Rotuma (OC-060) is now confirmed for 14 December,
and Tony, 3D2AG expects to be active as 3D2AG/p starting
around 17 December until around mid-January 2020. He plans to
operate CW, RTTY, FT8 (FT4) and SSB on 160-6 metres, with a focus
on the low bands and "QRO when required". On FT8 (FT4 he will be
using a multi answer protocol (not to be confused with the Fox &
Hound mode). He will have no access to the Internet while on the
island. The FT8 QSOs will be uploaded to Club Log after the end of
the expedition, while contacts made on CW, SSB and RTTY will be
recorded on paper logs as usual. QSL direct to 3D2AG (or Club Log's
OQRS for FT8 only); see https://www.qrz.com/db/3D2AG/P for PayPal
instructions and tentative operating schedule and frequencies.

4X - Five special callsigns are expected to be QRV on 26-29 December
from different locations: 4X20HNY from Jerusalem, 4X2XMAS from
Kfar Nahum (Capernaum), 4X3XMAS from Caesarea, 4X7XMAS from Haifa
and 4X9XMAS from Latrun. QSL via LoTW and eQSL only; a certificate
will be available on http://iarc.org/livelog/.

6W - The annual 6V1A expedition to the island of Goree (AF-045) will be
conducted on 13-15 December. Activity will be on various bands SSB
and CW. QSL via LoTW, or PayPal 6v1a.aras[@]gmail.com for a direct
card.
9M2, WEST MALAYSIA Rich, PA0RRS will be QRV as 9M2MRS between December 3 and February 27, 2020. Activity on HF using CW and digital modes. QSL via home call, Club Log OQRS and LoTW
C5, THE GAMBIA Andre, ON7YK is active from Bijilo until March 2020 as C5YK. Operation from 60 to 10 meter using FT8 with some SSB and CW. QSL via home call, LoTW. http://www.on7yk.eu/

EA - The Mike Delta Victor DX Group will be active as EG3PCD on 2-5
December for the International Day of Persons with Disabilities.
QSL via LoTW only. See http://eg3pcd.mikedeltavictor.com/ for more
information.

HR - Gerard, F2JD will be active again as HR5/F2JD from Copan, Honduras
from 12 December to 4 April 2020. He will operate CW, SSB and
digital modes on 160-6 metres. QSL via F6AJA, direct or bureau;
logsearch on http://LesNouvellesDX.fr/voirlogs.php.

HS - Brad, VK2BY will be active again as HS0ZNR from Nam Yuen, Thailand
from 14 December to 8 January. He will operate SSB and FT8 on 80-10
metres. QSL via LoTW, Club Log's OQRS, or direct to VK2BY.

LU - Special callsign L50JT will be active on 1-14 December to mark the
50th anniversary of the opening of the underwater road tunnel that
crosses the Parana River and connects the provinces of Entre Rios
and Santa Fe in Argentina. Look for activity on 80, 40 and 20m SSB,
CW and digital modes. The log will be uploaded to LoTW, eQSL and
Club Log.

ON - UBA Section Bruxelles-Est (ON5UB) will be active as OR75NUTS on 13-
15 December to commemorate the 75th anniversary of the Battle of
the Bulge during World War II. The suffix of the special callsign
is General Anthony C. McAuliffe's famous single-word reply in
response to a surrender ultimatum. QSL via ON5UB.

PY - The Guara DX group will be active as ZW132GBA between 26 November
and 15 December to celebrate the 132nd anniversary of the city of
Guarabira, in the Brazilian state of Paraiba. QSL via the bureau,
or direct to PR7AX.

S5 - Special event station S589PMC will be active from 6 December to 5
January 2020 to promote the PMC Contest, sponsored by the Radio
Club Slovenj Gradec (S59DCD). All QSOs will be confirmed via the
bureau. The International Association of Peace Messenger Cities was
established in 1988 to recognize and encourage the role and
responsibility cities have in creating a culture of peace. The PMC
Contest, promoting contacts between stations located in the Peace
Messenger Cities and the rest of the world, will be held on 4-5
January (see http://www.s59dcd.si/ for complete information).

VE - Jeff, VY2ZM and Miriam, VY2NA will be active as VY2NA/VE2 from Zone
2 (WWL FO60te) on 6-12 December. Their main objective is to try and
give Zone 2 on 160 metres to more stations in Japan and the Pacific
basin. Plans are to operate CW for JA "starting 0700-0800Z on
1825.5 QSX down at 1824.5 initially each morning. If no propagation
exists on CW, we will switch to FT8 transmitting on either 1840 (or
perhaps 1838) QSX at 1908 for JA and other callers. There will be
some operating time devoted generally to other areas at other times
on Topband".
XT, BURKINA FASO Harald, DF2WO will once again be QRV as XT2AW from December 2 until December 20. QRV on HF using CW, SSB and digi. QSL via M0OXO, LoTW.

YO - Special callsign YR2019REV will be active between 1 December and 1
February 2020 to mark the 30th anniversary of the Romanian
Revolution of 1989. A certificate will be available; information
can be found on the Romanian Amateur Radio Federation's website:
http://www.hamradio.ro/revolutie2019/index.php.

YV - The YW5F operation from Farallon Centinela (SA-058)
has been postponed to 29 November-2 December. YV5EED, YV5IUA, YV5NR
and YV5ZV plan to operate SSB, CW and FT8 on all bands. See qrz.com
for their bandplan. QSL via YV5DTA (W4DTA); logsearch on Club Log.
ZC4, UK SOV BASE CYPRUS Members of the Cambridge University Wireless Society (CUWS) will be active as ZC4UW between January 2 and January 7, 2020 as ZC4UW. They plan to use rigs stations from 160 to 10 meter using CW and SSB. The occasion for the DXpedition is the 100th anniversary of the Cambridge University Wireless Society. The team will consist of G3ZAY, M0BLF, M0VFC, G7VJR, M0ZXA, G7SOZ, M0WUT and M0BBB. QSL via Club Log OQRS, LoTW.
AS-153 Ganga Sagar Mela Operators from West Bengal Radio Club will be operating as 8T2G between January 10 and January 17, 2020. QRV on HF. QSL via VU2NRO.
NA-211 Tillamook Rock Permission has been obtained for a DXpedition somewhere during December. A team with Mike AD5A, Rob N7QT, Alexej NW7M and Yuri N3QQ will be operating from the Rock. There is a fundraiser on Facebook to help cover the transportation costs. More to follow. https://www.facebook.com/donate/444710879405793/2710859262274736/
4U1UN ---> Adrian, KO8SCA was active on 40 metres SSB from the United
Nations Amateur Radio Club for about one hour (23.00-00.00 UTC) on 27
November: "more good things to come in future, now that the remote setup is
working correctly". QSL via HB9BOU.

Antarctic Bases
Halley VI Base Between mid-December 2019 and mid-February 2020, Seba SQ1SGB will be active from Halley VI Base as CE9/SQ1SGB on 40 and 20 meter using SSB and digital modes during his spare time.
Neumayer III Station Felix, DL5XL will once again be active from Antarctica using callsign DP1POL. Activity is from January-February 2020 on HF bands, mainly in CW when time permits. QSL via DL1ZBO, LoTW.
Neumayer III Station Look for Roman, HB9HCF to be active from Neumayer III Station during the upcoming 2020 scientific research season. QRV on satellites and possibly HF bands QSL via DL5EBE.
Wolf’s Fang Camp Oleg, UA1PBA is operating when time permits as ZS7ANF. QSL via RK1PWA. http://www.waponline.it/zs7ant-a-new-antarctic-season-by-oleg-sakharov/

REAL PROPAGATION IN 2018 ---> This new service offers 18,000+ real-life
propagation charts from one ITU zone to another ITU zone over 2018:
https://voacap.com/visualprop. The raw data came from HamSCI, while data
processing and visualization have been done by VE3NEA. The raw spot dataset
included some 8 billion FT8 spots spanning from 6 to 160 metres (60 metres
included) that were collected from sources such as PSK Reporter during the
entire year.

WSJT-X 2.1.2 ---> The latest release of WSJT-X, the software suite that
includes the FT4 and FT8 protocols, is now available. WSJT-X 2.1.1 (released
on 25 November) was a bug-fix release to address several regressions in
version v2.1.0. WSJT-X 2.1.2 (released on 26 November) is "an emergency bug-
fix release" to correct errors that crept into the Hamlib package bundled
with v2.1.1 and affected control of certain Icom radios. The installation
packages for Windows, Linux and Macintosh, as well as the User Guide, can
be found on http://physics.princeton.edu/pulsar/k1jt/wsjtx.html. Upgrading
from earlier versions of WSJT-X should be straightforward. There is no need
to uninstall or move any files.