Due to the ongoing COVID-19 situation globally, announced activities might be cut short, postponed, cancelled or even extended at any time and without notice... 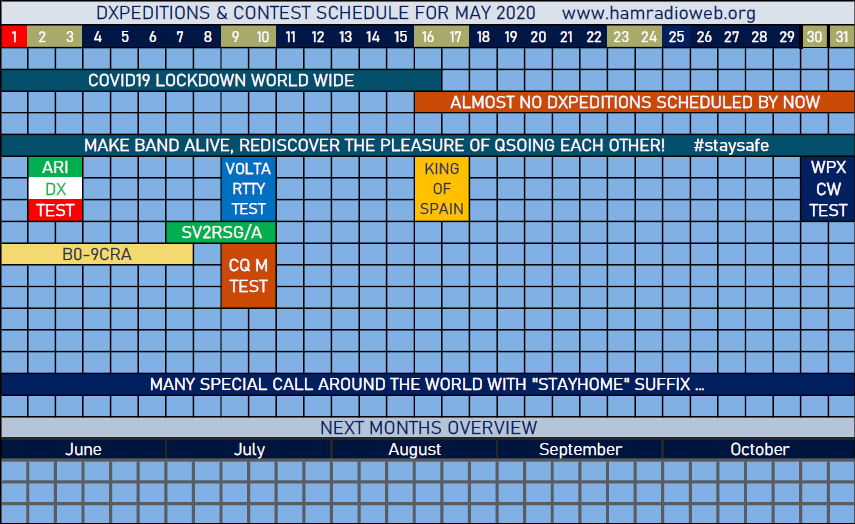 7Q   - MALAWI (Postponed). Pista, HA5AO, who was expected to be active as 7Q7AO from Malawi during the second half of September/early October 2020, has postponed his operation. He states on May 15th: "Due to the COVID-19 pandemic and travel restrictions I have to postpone my planned operation from Malawi. New date will be announced." For updates, watch his Web site at:      https://www.ha5ao.com/index.php/news

EA     - Special callsign AM40LAR will be active  on  14-31 May for the 40th anniversary of  "L'altra radio"  (The Other Radio),  a weekly radio programme specialized in telecommunications and audiovisual culture broadcast  on  Radio Nacional de Espana's  channel  in  the Catalan language.  QSL via LoTW and eQSL.  A certificate will be available, see https://am40lar.mikedeltavictor.com for information.

F      - The Radio Club de Cestas (F6KUQ) will be actiive as TM0BEE on 16-24 May to mark World Bee Day. Look for activity on 80-6 metres CW, SSB and digital modes.  QSL via F6KUQ or eQSL.  Pollination is a fundamental process for the  survival  of our ecosystems,  but bees  and other pollinators are increasingly under threat  from human activities.  To raise  awareness of  the  importance of  pollinators, the threats they face  and  their contribution to  sustainable development, the UN designated 20 May as World Bee Day.

G      - David, G4YVM will be active as  GB4DLS until 2 June to  commemorate the  80th anniversary of the  pivotal role  played by the  "Dunkirk Little Ships" during Operation Dynamo (26 May and 4 June 1940).  He will operate mainly CW, but "will try to run some SSB as well". QSL via G4YVM.  The Little Ships of Dunkirk were a flotilla of hundred of  private  boats  that sailed  from  Ramsgate  (England)  to help evacuate  338,000 Allied soldiers  from the beaches and harbour  of Dunkirk in northern France.

HK     - The  Ministry of Information Technologies  and  Communications  has granted a special "stay home"  callsign for the  Liga Colombiana de Radioaficionados'  members to use.  Look for  5JSTAYHOME  (only one digit) to be active  on all bands and modes from  12 May to 27 July
QSL via LoTW and eQSL.

I      - 4U9STAYHOME is  the  special  callsign  for  the  UN Global Service Center's Amateur Radio Club (4U1GSC) to join the Stay Home campaign from 15 May to 15 June.  DXCC wise, this activity counts for Italy. QSL via 9A2AA, direct or bureau.

I      - Michele, IZ2FME will operate CW only as II2EMCA between  1 July and 31 December. The special callsign's suffix stands for  Emilio Caimi (1876-1963),  the straight key manufacturer  whose company supplied the  Italian Royal Air Force  in the  Thirties.   QSL via LoTW,  or direct to IZ2FME.

OK     - Amateur radio became fully legal in Czechoslovakia on  19 May 1930, when  the first examinations  for a licence  were administered.  To celebrate the 100th anniversary  of this milestone,  twelve special callsigns  will be active  on  19-31 May.  Six callsigns  (OL901AA, OL901AB, OL902AC, OL901AF, OL902AG and  OL901AH)  will be in memory of  the  first licencees,  while  other  six  callsigns  (OL90SKEC, OL90KVAC, OL90CAV, OL90ROH,  OL90SVAZARM  and  OL90CRK)  will memorialize the historic and current amateur radio organizations in the Czech Republic. QSL via the bureau, LoTW and eQSL.  Complete information on the OK-90 Award can be found on https://ok90.hamqth.com/.

TG, GUATEMALA. Enrique, YS1RM, is now active as TG9/YS1RM from Guatemala
City. Length of his stay is unknown at this time. Activity will be on
various HF bands and modes. No other details were provided. QSL via YS1RM,
direct, LOTW or eQSL.

UR     - Special callsigns EM100ALK, EM100LK and EO100A will be active  from 1 June  to  1 July  to memorialize  Ivan Nikitovich Kozhedub (1920-1991).  QSL  via  operator's  instructions.  A certificate  will be available,  see https://www.qrz.com/db/EM100ALK for information.  A Marshal of Aviation, Ivan Nikitovich  was a flying ace,  attributed with the highest number of air combat victories of any Soviet pilot during World War II.

VE   - CANADA (Special Event). Jean, VE2JCW, will use the special callsign VE2SPEED throughout the month  of June, to commemorate the Montreal Grand Prix even if it is canceled. QSL via VE2JCW info on QRZ.com.

XP/OX   - GREENLAND. Henning, OZ2I/OZ1BII, will once again be active as XP2I from Black Ridge, Kangerlussuaq (WW Loc. GP47PA) sometime late November. Activity will be CW only on all HF bands. He will participate during the CQWW DX CW Contest (November 28-29th) as a Single-Op/All Band/Low-Power entry. For activity outside of the contest, he will sign OX/OZ2I. QSL via OZ2I, LoTW, eQSL or ClubLog's OQRS. For more details and updates, see:          http://www.oz2i.dk/index.html

ZS     - ZS1820S is a special callsign celebrating the  200th anniversary of the arrival of the  1820 British Settlers in the  Eastern Cape area of South Africa.  The callsign  will be active  for the rest of the year on various bands and modes. QSL via LoTW and logsearch on Club Log; electronic QSLs can be requested from ZS2EC by email.

QSL 9J2LA ---> "I am still waiting for the 9J2LA cards to arrive from  UX5UO QSL Print", Charles (M0OXO) reported on 12 May. A certain delay was expected "due to Covid-19 issues", but apparently "there are more restrictions on the route between Ukraine and the UK. Labels and envelopes are all ready here, I just need the cards  to arrive  and  they will be mailed within  48 hours of receipt". Please be patient and  "stop emailing me asking about the position of the cards and LoTW".

QSL EY8MM ---> Mike Cizek, W0VTT is the  new QSL manager  for  Nodir, EY8MM. Mike will have all logs dating back to 1 January 1994.  A batch of new cards has been ordered, but it might take some time before Mike receives them.

QSL VP8PJ ---> The  QSL  cards  arrived  from  ON5UR QSL Print Service,  Tim (M0URX) reported on  12 May,  "so the job of labeling the cards and stuffing the envelopes begins. ALL cards requested up to the mailing date will all be sent in the mailing and a press release from  the VP8PJ team will inform you when the job  is done"  The OQRS on https://www.m0urx.com/ is open,  "so you still have time to make your QSL request".

CAMPBELL  ISLAND  (ZL9) ---> "The  Perseverance  DX  Group (PDXG)  has  some unfinished business".  Several PDXG members participated  in the  2012 ZL9HR DXpedition to  Campbell Island  that was cut short by weather.  "After their Successful  VP8PJ South Orkney Islands  2020 DXpedition,  PDXG is pleased to announce their intention to activate  the  New Zealand Sub Antarctic Islands (ZL9), Clublog #24 Most Wanted, in the 2021-2022 timeframe.
The plan includes  160-10m operation,  CW/SSB/RTTY/FT8,  with an emphasis on 160, 80, 60, 40  and,  propagation dependent, 12 and 10 metres.  The landing permit process is pending and discussions  with transportation partners have begun.  However, the Covid-19 lock down  has caused  significant delays  and uncertainty.  Additional information will be published as it develops".

CQ CONTEST HALL OF FAME ---> Established  in  1986,  the  CQ Contest Hall of Fame honours those contesters who not only excel in personal performance but who also "give back" to the hobby in outstanding ways.  CQ Contesting Editor David Siddall (K3ZJ) conducted a  virtual induction ceremony  at the conclusion of the daylong 2020 Contest University webinar  on 14 May.  This is the
37th  annual  induction  and  the first  to be  conducted  online.  The 2020 inductees to the CQ Contest Hall of Fame are:

* Geoffrey Howard, W0CG/PJ2DX, who purchased and restored the PJ9JT  contest station  in 2000  that  had been owned  by  CQ Contest Hall of Famer  John Thompson, W1BIH/PJ9JT.  The location was named "Signal Point" and the PJ2T callsign pays homage to PJ9JT.  Geoff  established  the  Caribbean Contest Consortium to help manage and  maintain the station,  and has consistently made the  station available to  guest operators over the years,  including serving as host station several times for young operators participating in the  Dave Kalter Youth DX Adventure  program.  He has also worked  closely with VERONA, Curacao's national ham radio society.  Geoff served  for more than 25 years  in  the  United States Air Force,  retiring  as a  colonel; worked for RCA and the Federal Aviation Administration, and taught in  the Graduate School of Management at Kent State University in Ohio.

* Willard "Bill" Myers, K1GQ,  a pioneer of  computer-based systems  for designing and switching antennas at contest stations, designed the Cushcraft "Skywalker" series of monoband Yagis, helped build the early PacketCluster network  and served  as mentor  to several of today's  most prominent contesters, including  K1AR, K1DG, K1JX,  and others.  Bill was also a  major behind-the-scenes  force  at the  2014  World Radiosport Team Championship (WRTC) competition in Massachusetts,  and is currently  providing  support and refinement  of the  SkookumLogger  contest  logging program for  Apple computers.

* Gene Zimmerman, W3ZZ (SK), was a major force in VHF contesting as well  as an accomplished HF contester. He was a member of both ARRL's and CQ's contest committees at various times between 1972 and 2012, was QST magazine's VHF Editor for nearly a decade, and was  CQ Contest magazine's VHF  columnist as well. Gene took over the struggling  CQ World Wide VHF Contest  in 1999, reinvented it as a 6- and 2-meter only event and sparked its  growth into a truly worldwide competition. He was also instrumental in organizing the mid-Atlantic VHF contesting group that  became known as the  K8GP Grid Pirates.

Registered participants in the virtual Contest University webinar  were able to view the induction ceremony live.  It was also "simulcast"  on  DX  Engineering's   YouTube  channel,  where  it  is   stored  for  later   viewing: https://www.youtube.com/user/DXEngineering/featured  (the recording  of  the ceremony starts at 09:15:30).
CQ is issuing a separate news release  this year  -  with  separate  release times - for each of the CQ Halls of Fame (Amateur Radio, Contest and DX) due to disparities in scheduling induction events. The DX Hall of Fame induction is planned to air live on  Ham Nation (https://twit.tv/shows/ham-nation)  on 20 May at 21 EDT (1 UTC on 21 May),  with the  on demand  download available
within 24 hours.

DXPEDITION OF THE YEAR ---> On  14 May  the  Southwest Ohio  DX  Association announced  their  2019/2020  DXpedition of the Year award,  which regognizes "excellence  in  DXpedition  planning and execution"  from  Most Wanted DXCC Entities. DXpeditions completed from  March 2019 through  February 2020 were eligible for this year's award, which has been presented to the TI9A DXpedition to Coco's Island (February 2020).  Watch the video of  the announcement on https://www.swodxa.org/dxpedition-of-the-year/